A Story of Hope

To have a child lost to alcohol or drug addiction is to suffer a thousand deaths. The more you try to save them from their addiction the more it burns a hole in your heart. Watching their light fall away into darkness, you enter your own world of pain. But while you may feel stranded by fear and confusion, you are not alone.

There are people out there walking the same path. They are the ones, the only ones, who really understand because they are like you, like Joyce. Joyce has a son named Eric, an educated son with an angelic face and bright future. Yet by the time he reached his late 20s Eric was sleeping under an oleander bush behind a grocery store. He was homeless, living on the streets, in and out of jail, in and out of treatment centers, addicted to opiates.

“The hardest thing was watching him make the same wrong decisions over and over again—and realize I couldn’t stop him,” Joyce says. “There was absolutely nothing I could do.” Doing nothing can be difficult for any parent. But for Joyce, a nurse accustomed to helping people heal, it was brutal. “I was the kind of mother who looked up all the treatment places, did everything I could to get him help,” she says. Until he finally told her to leave him alone and shut her out completely.

Fortunately Joyce remembered something she’d heard at a treatment facility called Calvary Addiction Recovery Center in Phoenix, AZ. “During a family weekend at Calvary, I learned about a group called PAL, Parents of Addicted Loved-ones. It was a support group for parents with a child suffering from addiction, with a counselor serving as guide,” Joyce says.

“I went and found parents in the same position, parents further along in the recovery process who wouldn’t judge me. They understood what I was going through, how it felt to love someone with a serious addiction. Other people tried but couldn’t fully understand. You can’t really relate unless you’ve lived through it.”

Through PAL, Joyce realized she couldn’t fix her son. “That was hard to accept. As a parent I thought I knew what was best for him. When he wouldn’t accept my help, I had to step back. At PAL, we helped each other see and accept the truth—about ourselves and our loved ones,” she says. “The more we understand what addiction does to a person the better. I look at my son and wonder how he could do all the awful things he did. I don’t want to believe it. It takes time to believe it. Someone who abuses substances, lies a lot. You wonder, How can my child lie? That dishonesty is something it takes a parent awhile to accept. Together we can say to each other, ‘They are lying to you. You are enabling them.’ That’s hard to do alone.”


“It is a family disease, in that everyone in the family is affected by it. It strains relationships. All energy and resources are directed to the addicted one. There’s so much drama with the addicted one, especially if the law is involved. It’s hard to sort out where the problem is because there isn’t just one problem. The addiction is only the top of the problem; there’s a lot of things down the line. That’s why the group is so important.”

Eric’s own day of reckoning came when he lost a close friend to overdose, bringing him face-to-face with life’s ultimate question: To live or to die? He decided he wanted to live. He chose life, something no one else can choose for you. With nowhere else to go, Eric went into another recovery program; something he’d tried and rejected four years earlier. “He just didn’t buy into treatment centers or 12-step programs,” Joyce says. “But he ran out of choices.”

Now Eric is 29 years old, clean for over a year, on good terms with his mother, and reaching out to other people with addictions. Joyce not only continues to go to PAL but has started a group of her own at Scottsdale Bible Church at 3:30 p.m. on Sundays.

“In Corinthians the Bible talks about how God is the God of all comfort,” Joyce says. “As we are comforted by God, it is our responsibility to comfort and encourage the next person.” Starting a PAL-group is something any family member of an addicted loved-one can do with a little help from Mike Speakman, PAL founder and primary facilitator.

For more information about PAL-Groups, call PAL at 480-300-4712 or email at info@legacy.palgroup.org. 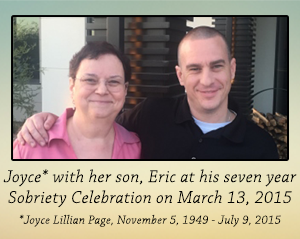 A single mom with a lost son written by Catherine Behan. Catherine lives in Prescott, AZ. A graduate of the Master’s program in Journalism, University of Arizona, Tucson. She has over 20 years of experience as a reporter, columnist, and editor of such publications as the Denver Business Journal, Phoenix Home and Garden, and Sedona Magazine.